What is an image

The conference will be live-streamed. Please follow this link.

Images multiply rapidly in these years as apps, tablets, social media, selfies, GPS, drones, visualizations in science, not least, medicine, etc. An image is very dynamic and very moving at this time. The conference will focus on these changes - and try to see if there is still something that can be assembled to a characteristic of What is an Image? 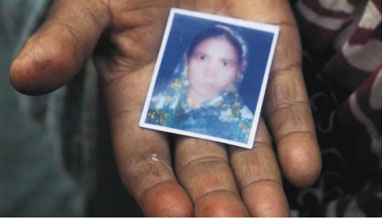 About the mage: The photo is from Bangladesh in 2013, where a disaster in a clothing plant buried and killed many people, a man is searching for his wife or child or relative, with this blurred photo. His rough hand holds it like silk, like an endearment, like something precious. The image is life for him, even though the photo is a fixed moment and in that way ‘dead’. He wants the life of his dear one in return for his priceless still photo. The photo of the photo was taken by a friend of mine; she was in Bangladesh as part of a rescue team. In the text, I mention the drone that kills for an image. Here is the opposite, life for an image. The man holding the photo is touching destiny, it is wish for life instead of an image.

The traditions are in all likelihood related to these positions and to the images now. There has always been an ambivalence to images, even in the form of prohibition of images and iconoclasm. What is so dangerous about the images? And are they still dangerous even though we upload billions of images to Instagram and Facebook every day? Or we simply snap them quickly to a Snap-chat? Luther was not against images as such, he was just against those that took us by the heart. However, we are still part of a culture with an ambivalent relation to images, even the images we speak and write. Our language is developed from primarily visual sightseeing, and we constantly form metaphors and symbols with our language.

Furthermore images work both on the internal, mental level and on the external, social level. The internal (in memories, dreams, fantasies and as psychosomatic signs) influence and intervene in the other working on the external level. The mix is part of the image as such, but is also a growing factor in modern images in bringing the internal rooms into the public rooms, and vice versa. But the modern devices also bring the 'instruments' closer to the body and its mental rhythms.

Images can provide both an overview and insight, but also the opposite. This ambivalence has become an even bigger part of the nature of the image, of what is an Image? Today we kill for an image, seen from afar on a screen and captured by a drone. The time also asks: Should it be big data or single data that leads our observations and analyzes? What do the images want from us, and what are the purposes of the images for us? Now as before.

At the conference, we have three prominent keynote speakers: Professor James Elkins, University of Chicago, Professor Lev Manovich, CUNY, New York and Professor Joanna Zylinska, Goldsmiths/University of London. In addition a number of other lecturers and presenters of high professional caliber.

The conference will be held in English.

"Images are the currency of our souls” (Antonio R. Damasio)

Organizer: Bent Fausing, INSS, in collaboration with the Department for Visual Design and the PhD School, KADK, and the Center for Advanced Studies, AAU.