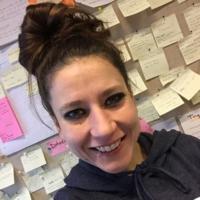 My PhD is part of INTERPRETING, a research project on interpreter-mediated interactions in the Danish health and legal sectors (funded by Independent Research Fund Denmark). Together with Martha Sif Karrebæk and Marta Kirilova, I investigate the interactional work citizens, institutional representatives and interpreters engage in when establishing understanding in court and in therapy sessions.

Now I am investigating the different types of "text oriented activities" the participants engage in during the different phases of the Constitutional Hearings. The engagement with and orientation to texts permeate the interaction in the courtroom; The identification of the accused, accomplished interactionally at the very beginning, is “fact-checked” against the case documents, then the prosecutor reads out loud the preliminary charge and during questioning he reads out loud selected extracts from the Police report. In the end, the judge summarizes “what the accused stated in court” (or at least his understanding of what the accused stated in court), and his words are written down as the summary of the hearing. The situated meaning-making process in court is thus hinged on the “understanding” of texts.