The slip collections consist of alphabetized index slips. Each slip contains a lemma (headword), its pronunciation, morphology, meaning or use, recorded from one particular source, and usually localized to one location, usually a parish. 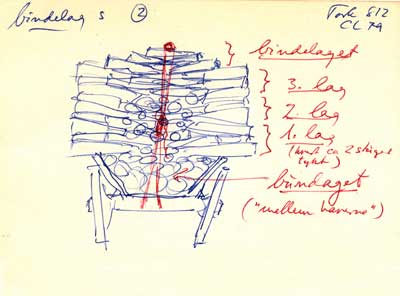 Bindelag – an example of a slip from the collection.

In some cases there are only one or a few slips a given word, in other cases there are hundreds. It depends on how widespread and common the word is, and slips can there give an impression the of the words’ geographical distribution and difference in meaning. 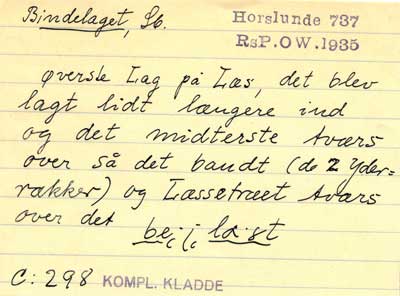 Bindelaget - an example of a card from the collection.

Most slips are transcripts of records by local "informants". Other slips are responses submitted by local inhabitants. And a small number are transcripts of printed sources, e.g. of peasant diaries, literary texts and older region descriptions. Each slip is equipped with l information on location informant or source and year.

The slips are divided into three collections: the Jutland Collection, the Insular Dialect Collection and the Bornholm Collection.

The Jutland Collection comprises approx. 2 million index slips. The bulk of the material is divided into major and minor collections each relating to one or a few parishes. The slips are ordered alphabetically in each collection. The Jutland Collection are dominated by extensive (especially phonetic) philological; there is an especially large amount of material pertaining to the South Jutland and the South Schleswig dialects. The majority of the Section’s Jutland records are copied to the Peter Skautrup Center of Jutland Dialect Research at Aarhus University for use by the editors of Jysk Ordbog (Jutish Dictionary).

The Insular Dialect Collection contains approx. 3 million cards. The collection is divided into different subject each of which is ordered alphabetically, in addition to a "miscellaneous collection" of words that are not specific to certain subjects and an "Accessions collection" with material that has been received or excerpt within the last decades. 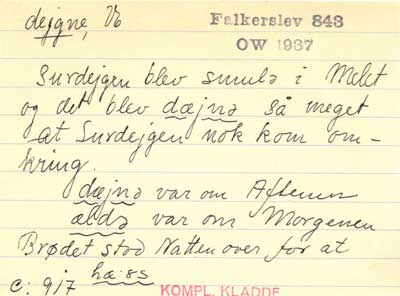 Dejne - an example of a card from the collection.

The Insular Dialect Collection is the basis of the publication of Ømålsordbogen (the Dictionary of Danish Insular Dialects), and the division into subjects has been done in preparation for drafting the dictionary with reference to editors.
The subjects include:

There are a total of 60 different subjects.

There are 2 additional manuscripts of word collections (by P. K. Stibolt and Th. Teinnæs) that are not printed on index slips, but instead embedded in one of the department's textbases. The manuscripts are based on extensive records of the Bornholm dialect and are basically structured as dictionary articles. They both relate to J. C. S. Espersen's Bornholmsk Ordbog (1908, reprinted 1994), ensuring that in particular the words and usages not found in Espersen are noted. The word forms and examples are predominantly written in the “orthography of Bornholm", rather than phonetically.