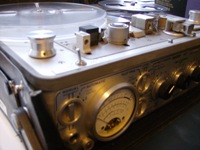 The recordings are registered in separate registers containing information on the location, speaker(s), time, content etc. A common database is currently underway. The database isn’t available on online, but can be accessed in the Section’s library.

Since 1910 recordings have been made of traditional dialects across the country. The oldest recordings are phonograph records of very poor sound quality, the slightly younger are on gramophone records, and the newest (recorded since 1953) are on sound reels. Phonograph and gramophone records have been copied to sound reels, and all the material has been copied to CDs.

Most recordings are interviews where the interviewee tells of his or her life, the work he or she has participated in, and big and small events. The storytellers are older people who have lived their entire lives in the same region. Most have been employed in agriculture or fishing, but there are also some rural craftsmen. The oldest storytellers were born in the 1840s.

The content of the recordings is registered in in the tape subject registers.

Almost 200 recordings are transcribed, and a large portion of the transcripts is available online via Korpus CorDiale. The transcripts are without sound.

In connection with sociolinguistic studies, recordings were made in many places in Denmark with informants of different ages, genders and social groups. The audio mostly consists of interviews, but can also be group discussions or even recordings where the informant recorded daily conversations on a portable tape recorder. The language of the recordings varies from (near) traditional dialect to (near) standard Danish.

Much of the footage has been transcribed, neither transcriptions nor audio recordings are, however, available to the public, as informants have been promised anonymity. Short excerpts of regional language recordings are found in the book Danish Spoken Varieties with accompanying audiotapes.

In addition to a small number of recordings of older low and upper class Copenhagen Danish, the archive contains a special collection consisting of approximately 160 recordings made under the Projekt Bysociolingvistik (1986-91). There are recordings of Copenhagen informants of different ages, gender and education level, partly in the form of interviews, partly group conversations. Much of the recordings has been transcribed (and anonymised), and the transcripts are available online via Korpus BySoc. The transcripts are without sound.

In an ethnographic study from 2002, 52 students from two high-school classes from Metropolitanskolen in Copenhagen were interviewed. An additional 10 group recordings with 5 people in each group were made, and 7 people recorded themselves in so-called self-recordings.

For the sake of the informants' anonymity, the recordings are not publicly available.

In 1998 different types of recordings of young people's language in ethnically mixed environments in Avedøre, in Nørrebro and Vesterbro were made. The purpose of the recordings was to investigate whether a  new variant of Danish is evolving a as a result of immigration. The informants were between 14 and 18 years old. The recordings are interviews, self-recordings and group recordings. For the sake of the informants' anonymity, the recordings are not publicly available.

The collection also includes several recordings of discussions in hiring committees before and after the interviews and of the committees' conversations when ranking candidates.

The collection of employee interviews includes 36 interviews recorded in 6 Danish companies between 1998 and 2004. Companies and employees in the interviews appear anonymously. There are private and public companies and mixed forms between the two. The interviews typically last one and a half hours. 16 of the talks are available in printed form, and a few excerpts from the conversations have been transcribed according to conversation-analytic standards.

The collections of job and employee interviews include in some cases loosely structured qualitative interviews with individual participants. In these Jann Scheuer, who has collected the material, provides the participants with a professional response to the interviews.

The collection of individual salary negotiations includes 22 individual negotiations recorded in a private Danish company in 2004 and 2005. Companies and employees in the interviews appear anonymously, and the conversations are strictly confidential. The conversations last between six minutes and one hour, and are also collected by Jann Scheuer.

The collection includes recordings (interviews) with 25 Danish-Americans living in the United States. The recordings are from 1966-67. They are not by the Dialectology Section, but are simply archived here.

7 Danish linguists have been recorded talking about their lives as researchers. The recordings are from 1977-1982, and linguists are Harry Andersen, Poul Andersen, Kaj Bom, Kristian Hald, Aage Hansen, Karl Martin Nielsen and Peter Skautrup.