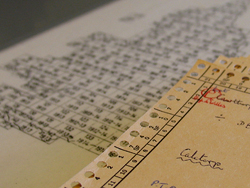 At the Centre for Name Research there is a plentiful collection of Scandinavian place-names and name elements from the Viking settlements in the British Isles and Normandy.

This collection is essential to name research, not least because it facilitates a precise dating of place-name types in Denmark by comparing them to names in the Viking settlements.

The geographic scope of the collection is the Danelaw, i.e. the part of England which came under Nordic rule and law during the Viking Age, and consequently experienced large-scale Scandinavian settlement.

The collections consist partly of index card containing information about place-names and name elements and partly of topographical maps of England and a large part of Scotland. The collection of index cards is arranged geographically and is partly made up of edge-notched cards – a technology which until the 1980s acted as a precursor to computer technology by allowing the cards to be sorted mechanically.