The Centre has a substantial collection of maps, most of them covering Denmark, such as a complete collection of sea charts, several complete collections of the maps produced by the National Survey and Cadastre at various scales. Additionally there are a number of maps of areas outside the borders of present-day Denmark with place-names of Danish origin. The maps date from the late-18th century until present day.

The collection consists of two different kinds of maps: some are maps which are themselves historical sources for place-names, while others are maps on which onomasts have written numbers denoting place-names which are found in other sources. See reports and records. 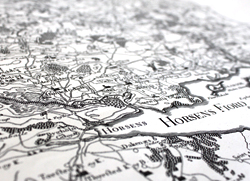 The survey map (1:20.000, original ordnance survey maps from 1762-1820) made by the Royal Danish Academy of Sciences and Letters are an important source for place-name research. The collections at the Section contain both photographs and digital copies of the maps.

The maps represent the first comprehensive and to scale mapping of the Kingdom of Denmark and they show settlements, roads, streams and forests. Survey maps were the precursor to Royal Danish Academy’s printed maps (1: 120,000) from the period 1766 to 1828 which are also included in the collection.

There are also maps of areas with place-names of Danish origin outside Denmark, such as Scania, southern Schleswig, the Danelaw (Ordnance Survey maps as well as geological maps in various scale), and Normandy (one set of maps from ca. 1900). Topographical maps Norway, the Faroe Islands and Greenland are also part of the collection. 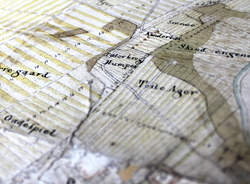 The enclosure maps (1:4.000) were primarily drawn in the period 1770-1810, and as they contain a large number of onomastic material they are an important source for name research. This part of the collection mainly consists of copies; the originals are found at the Danish Geodata Agency and in the Royal Archives.

The enclosure maps were the basis for the subsequent land registry maps, of which the oldest – known as Original 1 maps – give a detailed look at landscape and agriculture at the time of the enclosure movement which followed the agrarian reforms of 1800.

Maps from reports and records 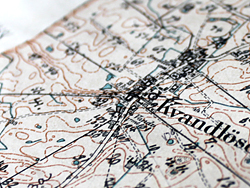 Each name on the lists of reported and recorded names was given a number by which it was identified on a parish map. One parish map constitutes one report map. In the 1920s reports came from between 1300 and 1400 parishes and approx. 150.000 place-names were recorded and located.