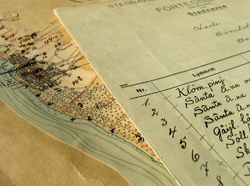 In the 20th century Danish place-names and their pronunciation have been documented through orally transmitted recordings. All of these can be found with their corresponding numbers on a unique collection of maps which can be accessed at the Section. See the Map collection for more information.

Shortly after the establishment of the Place-Name Commission in 1910, records were made throughout the country by trained philologists who phonetically noted the pronunciation of the names of villages, manors, some large farms and some important natural sites. This material is found in the topographical collections.

Reports from teachers and additional records

Large campaigns were launched in the 1920s to gather field-names, names of watercourses and woods, and those who undertook the work locally - primary school teachers – were instructed as to how they through primitive phonetics (Dania) could indicate, or at least suggest, characteristics of the pronunciation of each place-name.

As a supplement to this material, and especially to register the pronunciation of as many locally surviving field and natural names as possible, trained philologists were sent out from the 1930s - 80s to almost every parish in the country.

The subsequent material is ordered in lists in a collection of records, but parts of the material have also been incorporated into the topographical collections.

Sound recordings of the pronunciation of place-names

There are cassette recordings from the 1960s and 70s of local informants pronouncing the names of most Danish villages and a large number of farms. These are accessible in the sound archive.