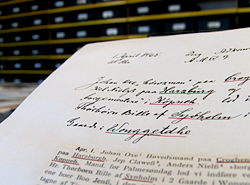 The chronological collection is diplomatarium from the Middle Ages. Each letter (diploma) is identified using the work Fortegnelse over Danmarks breve fra middelalderen, also known as Repertorium, the first word in its Latin title.

The known letters (approx. 25.000 in number) have been found in the various editions of the book, which was first printed in the 18th century. These editions have been bought, the letters cut out and glued onto thick paper, and the place-names have been underlined in red and lastly ticked off when they had been incorporated in the alphabetical and topographical collections respectively.

The collection is updated when new medieval letters are discovered, and the correct spelling of the place-names is cross-referenced with new publications of already known letters, such as the Diplomatarium Danicum. When the names differ a new spelling is incorporated in the alphabetical and topographical collections.

The chronological collection does, however, not contain all material from medieval letters. Letters that are only handed down in short summaries found in archive registers and the like must be found in the editions hereof. As the collection is strictly a diplomatarium other medieval sources such as rent-rolls and accounts are not found in this collection.