Printed series published at the department 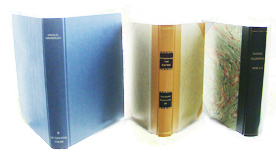 In 1937 the Arnamagnæan Commission decided to publish a series of works within the field of research of the Commission under the heading Bibliotheca Arnamagnæana. The monographs may be printed in a Nordic or a world language. The series Opuscula presents shorter articles on matters pertaining to the manuscripts in the Arnamagnæan Collection and older Icelandic, Norwegian, Danish and Swedish philology, codicology and literary history generally, along with editions of shorter works and fragmentary texts. All contributions are peer-reviewed and include a summary in Danish or English.

The series comprises scholarly editions of Old Norse-Icelandic texts typically equipped with substantial introductions detailing the transmission history of the works in question. They are primarily aimed at scholars, but can form the basis for editions intended for the general reader.

Care and Conservation of Manuscripts

The Arnamagnæan Collection hosts an international biennial seminar on the Care and conservation of manuscripts. Following the seminar, the speakers are invited to submit articles based on their presentations.
All contributions are peer-reviewed and written in English.

The Dictionary of Old Norse Prose

From 1937-2010 the Dictionary of Old Norse Prose was a project directly under the Arnamagnæan Commission, but in 2010 it became part of the Department of Nordic Research. ONP records the vocabulary of the prose writings of Old Norse, as transmitted in Norwegian and Icelandic manuscripts between 1150 and 1370 (Norwegian) or 1540 (Icelandic).
Three volumes have been printed and the rest of the dictionary is available online.

Editions from the Arnamagnæan Commission 1772-1938

These are a series of scholarly editions dating back to the earliest days of the Commission. The series has been replaced by Editiones Arnamagnæanæ.

Ømålsordbogen (the Dictionary of Danish Insular Dialects), describes the language and culture of Danish rural communities primarily before industrialisation, with emphasis on the period 1850-1920. In this period more than half of the population lived in rural areas, the larger part speaking dialect.

Danske Talesprog (Danish Spoken Varieties) is a journal published by the Dialectology Section and contains articles which fall within the scope of the research conducted at the Section, such as traditional dialects, sociolinguistic studies, social variation and language attitudes. While it mainly deals with the Danish language, it also includes Danish in interaction with other languages.

The Place-Names of Denmark

Published since 1922, Danmarks Stednavne (the Place-Names of Denmark) provides historical and philological analysis of Danish place-names. Each volume covers one county or township focusing on settlement names. Approximately 2/3 of the country is covered thus far. The individual articles contain the earliest known source forms, supplemented by later records, and offer an interpretation of the meaning of the names. Later volumes usually contain more explanation and discussion of the individual interpretations than the earlier volumes.

The Names of Danish Lakes, Streams and Rivers

Danske Sø- og Ånavne (the Names of Danish Lakes, Streams and Rivers) details all names of Danish bodies of water, as well as names of Danish origin in Scania, Southern Schleswig, England and Normandy. The names of approx. 7350 lakes and 8825 streams and rivers have been recorded.

The Place-Names of Southern Schleswig

The publication of Sydslesvigs Stednavne (the Place-Names of Southern Schleswig) began in 1948 with Volume 7 (!). The project has, however, been more or less abandoned due to the demise of its main contributors. The last volume (thus far) of the unfinished work was published in 1993.

The series Navnestudier (Name Studies) features interdisciplinary onomastisk research, including studies of Danish name material from the Viking colonies in the British Isles and Normandy. While most contributions are in Danish, certain volumes are also in either English or German depending on the subject matter.